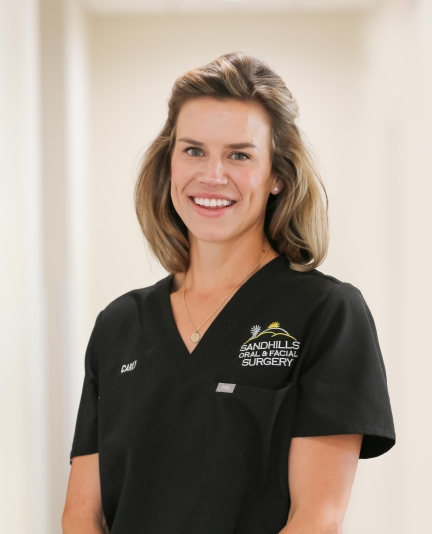 Carly Weber leads Sandhills Oral & Facial Surgery as Creative Director, bringing an expertise in leadership, team building and strategic growth to our team. She strives to promote collaborative partnerships with our patients and referring physicians. As a native Nebraskan, she is grateful to live in such a special community that is progressive and supportive.

Carly is originally from Columbus, Nebraska and grew up in Lincoln. She attended the University of Nebraska-Lincoln where she received a bachelor’s in Journalism and Advertising, and a master’s degree in Early Childhood Education. Having three sisters, Carly was born into a team and has kept it going for as long as she can! During her time at UNL, she played for the Women’s Soccer team as a four-year letter winner and captain.  She spent time competing in the semi-professional women’s soccer league and USA youth national teams.

After finishing her collegiate career as a Husker, Carly was drafted for the Women’s Professional Soccer League, and played for the Boston Breakers and Philadelphia Independence. She then returned to UNL as a Graduate Assistant Coach for the Women’s Soccer team. Carly and Dr. Matt Weber were soon married in Lincoln, NE. She joined a new team of 6-year-olds and began teaching elementary school. Carly continued to teach in Dallas, TX where Matt completed his Oral Surgery training. She eventually took time away from teaching to stay at home with their children, and begin planning for their dream to open an Oral Surgery practice in Nebraska.

Carly and Matt opened Sandhills Oral & Facial Surgery in 2019 and have loved raising their family and growing their business here. They have three busy kids- Jack, Georgia and Blakely. When Carly isn’t chasing them around or cheering them on, she enjoys being outside, traveling, and of course spending time with family and friends. Carly also enjoys serving as a board member for the Kearney Area Children’s Museum.